In the shadow of the Coast Mountain Range to the West and the Selkirk Mountains to the East, Kamloops’ warm dry climate, sagebrush hills and capricious winds make it a slice of West-Texas golf in the heart of the B.C. Interior.

The courses that make up the heart of Kamloops golf are as distinct as they are unforgettable. Recognized as some of the best golf in Canada by authorities like Golf Digest and ScoreGolf magazine, Tobiano, with it’s immaculate conditioning, challenging golf and a backdrop that sets it apart from any other course will have you begging for more.

Rivershore Golf Links, a masterpiece by the banks of the Thompson River, was designed by legendary architect Robert Trent Jones Sr. and has hosted the Canadian Amateur Championship. Eagle Point, a rolling course cut out of ponderosa pine forest, was voted a “best place to play” by Golf Digest Magazine, The Dunes at Kamloops, a links inspired gem, is the perennial host to the Canadian Tour Qualifying School and Big Horn, with immaculate fairways carved out of the sagebrush hills overlooking the river valley, was named the “Best new course in Western Canada” by Golf Digest Magazine. Individually these courses are great. Together they make for a fantastic golf vacation!

If you are looking for some great golf away from the crowds, Kamloops is your golf vacation destination.

Getting Here: Kamloops is four hours North East of Vancouver and two hours North West of Kelowna. It can be reached by highway from all four points of the compass. The primary route from the coast is via Highway 5, the Coquihalla. Kamloops has an airport that is served by Air Canada. More regular and affordable service can often be found into Kelowna or Vancouver. From there we can book you a rental car to get to Kamloops. 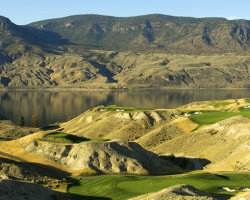 The Kelowna-Kamloops Golf Getaway may just be the best golf-getaway in the province! Stay four-nights and play four of the most unforgettable courses this province has to offer: Tobiano, Talking Rock, Tower Ranch and Gallagher's Canyon. Warm weather. Great accommodations and unbelievable golf. This golf vacation has it all! 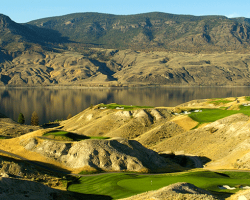 The Kamloops Golf Weekend Special has everything you are looking for: golf at the top-three courses in the valley, great hotel, dry sunny conditions and a great price. Enjoy soaks in the hot tub, swims in the pool, warm sunny weather, phenomenal golf and the kind of hospitality that has made Kamloops one of the best golf destinations in the province. 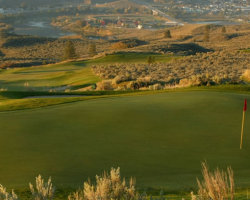 Kamloops may be one of the best-kept golfing secrets in all of Canada. Spend four days playing four of the newest and best courses in the province, including Tobiano (named best public course in British Columbia). This golf getaway combines warm sunny weather, swims in the hotel pool, small-town welcomes and some of the best golf in Canada to give you a golf vacation you won't soon forget. 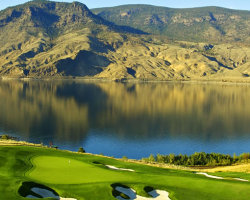 The golf in this Kamloops Golf Vacation is simply spectacular: Big Horn Golf Club - named the “Best new course for 2003 in Western Canada” by Golf Digest Magazine. Rivershore Golf Links - host of the 1999 Canadian Men's Amateur Championship. Talking Rock - the pride of the Little Shuswap Indian Band. The Dunes and Tobiano - named best new course in Canada when it opened, and named the best public course in British Columbia for the last three years. This is simply an unbeatable Kamloops golf vacation!

The Kamloops Golf Super Steal is proof that Kamloops is one of the best golf deals in the country. Play three acclaimed courses and stay in your choice of great accommodations for under $170 a day in the peak of the peak of the season! Summer golf deals don't get better than this!! 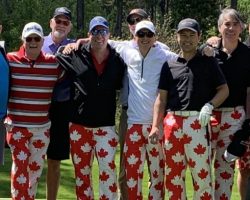 Why search endless travel sites and package options when you can call us toll free at 1 866 723-2747 and be done with it? We will listen to your plans, make some suggestions and put together an obligation-free quote tailor-made for your needs. With over 100 golf courses at our fingertips and the knowledge that comes from over 20 years of booking golf trips for groups and individuals, we are certain we can build a golf package you will tell all your friends about for years to come.

© Copyright 2023 BC GOLF SAFARIS. All Rights Reserved.
Website by The Web Advisors.